Where to find the cheapest petrol

The report shows the average range between the highest and lowest-priced major petrol retailer across the five largest capital cities (Sydney, Melbourne, Brisbane, Perth and Adelaide) increased to 11.4 cents per litre (cpl) in 2020, from 8.4 cpl in 2019. 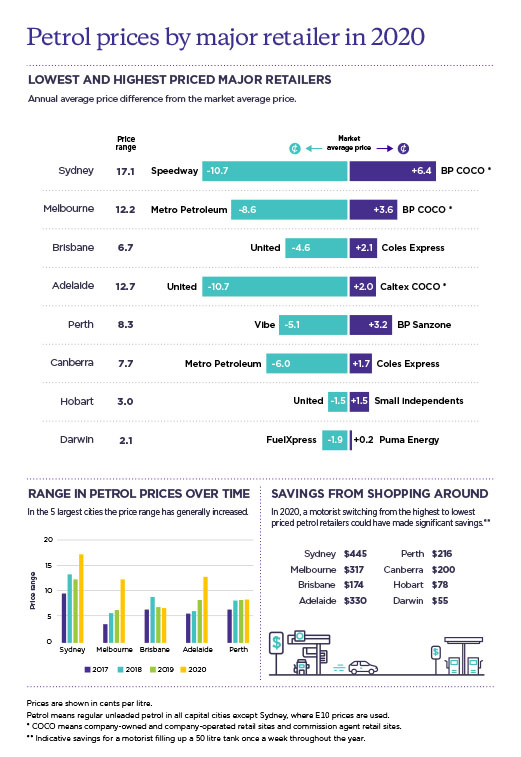 The ACCC’s analysis shows that motorists in Australia’s five largest cities could have saved a combined total of nearly half a billion dollars ($485 million) in 2020 by switching from a variety of higher-priced to lower-priced major retailers.

“The range of petrol prices available to most Australian motorists means the potential savings from filling up at one of the cheaper retailers are very significant,” ACCC Chair Rod Sims said.

“We often hear that all petrol prices are the same but this report shows that people living in capital cities do have choice about where they get their fuel, and how much they pay for it.

“Consumers should bear in mind that regular unleaded petrol sold in Australia typically comes from the same refineries or import terminals, and there are minimum quality standards that all retailers are required to adhere to. This means that motorists are getting petrol of a similar quality regardless of where they fill up,” Mr Sims said.

The report compares different major retailers’ annual average petrol prices in 2020 with the market average price, and reveals the savings that an average motorist could have made by switching from the highest to lowest-priced major retailer in each of Australia’s capital cities.

We regularly buy our petrol from the local Metro Petroleum service station because it is always the cheapest. Do you try and buy your petrol from an independent chain? Did you realise you could save a lot of money this way?

Keep the fuel tank as full as possible, not less than half empty at any time, keep observing price changes when nearing half empty and buy the fuel on a lower price period.
It is false economy to fill a near empty fuel tank when prices are high, also to put in a few litres while waiting for a price-drop, and this could create dilemma when parking at home with a near empty fuel tank if an emergency arises, and a rushed trip to a distant destination, hospital etc; is needed, especially in the middle of the night.

I agree with Mak. You simply need to keep your eyes open! But one helpful factor that never gets a mention in these surveys - supermarket dockets provide an extra 4c a litre discount off the posted price. Many shoppers ignore the extra bonus, for some reason, but at today's lowest Adelaide price of $1.17 means you only pay $1.13 at X-Convenience in SA with a Drake Foodland docket. X-Convenience are consistently cheapest around Adelaide, but Woolies' 4c off at Caltex/Ampol and Coles' at Shell Express, do help the family budget even when Shell is slightly dearer than others. Liberty and United fool a lot of motorists by listing ethanol-tainted petrol undercutting the price of pure ULP - don't use it because, in the final analysis, it will cost you more to use. It just isn't economical and will eat into rubber hoses on older vehicles.

Appreciation goes to BillW41 for adding the discount dockets which are available Australia wide from Coles, Woolworths and the various, locally-named supermarkets, 7-11 add extra discounts if purchases of products are made in the mini-mart.

So you did see my comment, Mak. Suddenly we're a mutual admiration society!

Nothing better BillW, I admire people who make peace, not war,
I know of Mak from a computer tech site several years ago, he used to teach and maintain computers for seniors, no payment wanted.

Thanks Spectre, at lease I made them wealthy, with computer confidence and knowledge.

Thanks for the info, Spectre. I could have used Mak's services had I known. My background, for anyone who might be interested, is in banking - retired 30 years ago - and writing. I've published four books on differing subjects and write articles on historic cars.