Sign In
The Meeting Place > Food & Recipes > What is Australia's national dish?

What is Australia's national dish?

Decades of urbanisation and multiculturalism have influenced Australia's robust food culture. Cuisines from all over the world have created the 'Australian Cuisine' as we know it today.

Australian food has expanded beyond delicious sweet treats (such as lamingtons) and savoury favourites to a wider range of globally influenced flavour profiles.

Royal Doulton  surveyed 1000 Australians and asked them, 'What is your favourite Australian Dish that can be cooked at home?'.

The results were sweet, cheesy and absolutely scrumptious.

Interestingly, they found that 27 per cent of the respondents chose chicken parmigiana as their favourite Australian dish.

Chicken parmigiana served with a side of chips and salad is a true Aussie food icon. The Italian inspired dish has come a long way from its eggplant days to becoming a nation's favourite dish.

The survey also revealed that 51 per cent of Australians opted for a sweet treat as their favourite Australian dish.

Out of which, 19 per cent opted for the oatmeal-based Anzac Biscuits, 17 per cent chose the meringue-based Pavlova and 15 per cent went with the coconutty goodness of lamingtons.

The long list of sugary treats was followed by modern meat and veggie favourites. Out of the 1000 respondents, 12 per cent voted for the BBQ special, Australian snags, six per cent opted for the snackable Chiko Roll, and five per cent chose the cheesy spinach cob.

Over the years, multiculturalism has impacted how and what Australians eat. The national favourite has come a long way from the traditional Australian Roast Lamb to embracing the cheesy deliciousness of Chicken Parmigiana.

What do you think is Australia's national dish?

It has to be the good old Aussie Meat Pie with sauce .

No pies for me...can't top the Aussie roast lamb! 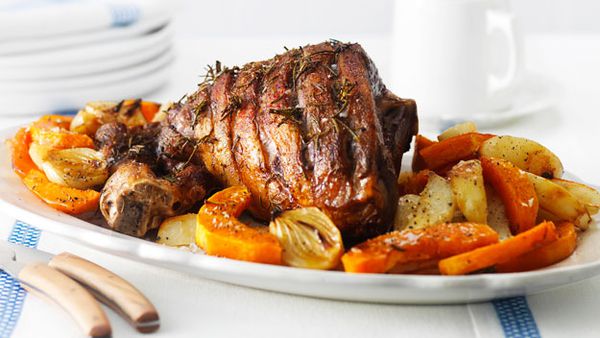 Yep - roast lamb for me every time.  With a nice lamington for dessert!

Maurice French, an emeritus professor of history at the University of Southern Queensland, who has examined the question in depth, believes that lamingtons were named after either Lord Lamington, who served as Governor of Queensland from 1896 to 1901, or his wife, Lady Lamington. The first known mention of "Lamington cake" appears in an 1896 newspaper account of a "Lamington Function" at Laidley in Queensland.

Of course one must not forget

Nothing beats a witchetty grub stirfry, good fun chasing the little burgers round the plate and biting their heads off, crackle crackle pop and wash the whole lot down with a jug of mangaitch