Poll shows government out of step with most Australians

The Federal Government is failing to meet the expectations of a growing majority of Australians who want to see immediate action on climate change and an energy policy that prioritises reducing emissions.

The findings are contained in a new Lowy Institute poll, which reveals that 78 per cent of people want Australia to commit to a net zero emissions target.

“From everyday Australians to key international partners such as the US and UK, the number of people who want Australia to do more on climate change is growing. But the Federal Government isn’t listening and continues to disappoint,” said Climate Council acting CEO Dr Martin Rice.

“While Australians suffer through worsening bushfires, heatwaves and other extreme weather events fuelled by climate change, the Federal Government is busy funding new fossil fuel projects and fanning the flames of the crisis,” he said.

The Climate Council recently set new science-based targets for Australia. We need to reduce our emissions by 75 per cent by 2030 based on 2005 levels, and reach net zero emissions by 2035.

“Urgent emissions reductions this decade will not only curb dangerous climate change, they will deliver many benefits ranging from lower electricity prices to secure new jobs,” said Dr Rice.

“The Federal Government’s failure on climate action threatens the health and wellbeing of Australians as well as our prosperity. We need urgent emissions reductions and a rapid, managed transition from fossil fuels to a renewables-powered economy,” said Dr Rice.

Why do you think the government continues to fund new fossil-fuel projects despite the majority of Australians supporting renewables?

Why do you think the government continues to fund new fossil-fuel projects despite the majority of Australians supporting renewables?

The Government are trying to hold their right wing who refuse to accept climate change is real and are also supporters of fossil fuels within the LNP fold. There is of course also the fact that the fossil fuel industry are BIG donors to the LNP.

Australia contributes about 2% of global carbon emissions.  The lobby advocating zero emissions has lead Australians to falsely believe that Australia will save the planet by carbon emissions to zero.  Until such time as the US, India and China make major steps to reduce their emissions our two percent will be a drop in the bucket.

I accept that we need to reduce our emissions and operate in a more environmentally sustainable way but I do not want to do it in a way that impacts negatively on global emissions.

Polls have their place which in a lot of cases is keeping pollsters employed. The real test of a poll is when those who are polled place their vote in the ballot box. If polls are to be believed then Shorten would be our PM, Hillary would have won the 2016 Presidential election and Britain would still be in the EU. It is noted that Labor took their zero climate change to the people, didn't tell us the costings and told us that not to do what they proposed would cost more. This may have been a part of why Shorten is not leading the Labor party.

I believe that the climate is changing, of that there can be no doubt but what I can't accept is that any government can do anything to stop the climate changing. There can be tinkering around the edges but the one question that is continually asked is how much the temperature of the Earth will be reduced when the $trillions have been expended. All we hear in answer to that question is the noise of crickets.

If renewables are so fantastic, why are we all still heavily subsidising them? And why, despite the huge subsidies is so-called 'green electricity' still so expensive? What is the climate lobby suggesting we do with all the Chinese-made solar panels when they start coming to the end of their life with all the contaminants they contain?

As someone said recently, climate change does not happen in the whine-bars of the inner city!

If coal, oil and gas are so fantastic, why are we still subsidizing them??

The Lowy Instutute report was reported on in other media and soundly torn to shreds by the readers.

The size of the sample was so small as to be statistically insignificant.

Many of the results were questionable at best.

For example one question asked was whether the respondents approved of a carbon tax and emissions trading schemes.  Not an either or, but an and and choice.  The differences between them are great and neither would actually contribute in any manner to improving the concentrations of GHGs in the southern hemisphere atmosphere.

Both would lead to increases in the cost of living in almost every respect.

Australia contributes (by general consensus and estimations) approximately 1.5% of the identified GHGs.  As has been said by a former Chief Scientist, even if Australia went to zero emissions tomorrow, it would make no change at all to the concentrations of CO2 in the atmosphere and make no difference to any of the projected climate changes.

The push to "decarbonise" the Australian economy and society is not driven by sound proven science but by political ideology. It would however lead to unstable and unreliable power Grid behaviour with increasing reliance on poor performing wind and solar supplies.

Yeah lets just keep polluting the atmosphere so kids can grow up with more pollution filling up their lungs, wake up people it is not just about climate change it is about clean air to breath!

Yes, let's STOP cutting down trees everywhere and plant more --why don't they make everyone have to have a tree instead of a gravestone, that would be a start.

Australia's air pollution is 17.3, Incognito, how clean do you want it? That is an average and considering most of Australia is desert I wonder how they come up with this figure.

Try telling this to those kids who live near coal mines and coal power stations.

Yes very true Incognito, the air is horrid around coal mining areas and port that they send it from

Nice try Incognito and PlanB, the map below posted by RnR shows that the Hunter Valley and the Port of Newcastle which covers coal mines, power stations and a coal port are still in the 0-50 category. I'm sorry to let facts get in the way of your fanciful stories.

Nice try Incognito and PlanB, the map below posted by RnR shows that the Hunter Valley and the Port of Newcastle which covers coal mines, power stations and a coal port are still in the 0-50 category. I'm sorry to let facts get in the way of your fanciful stories. 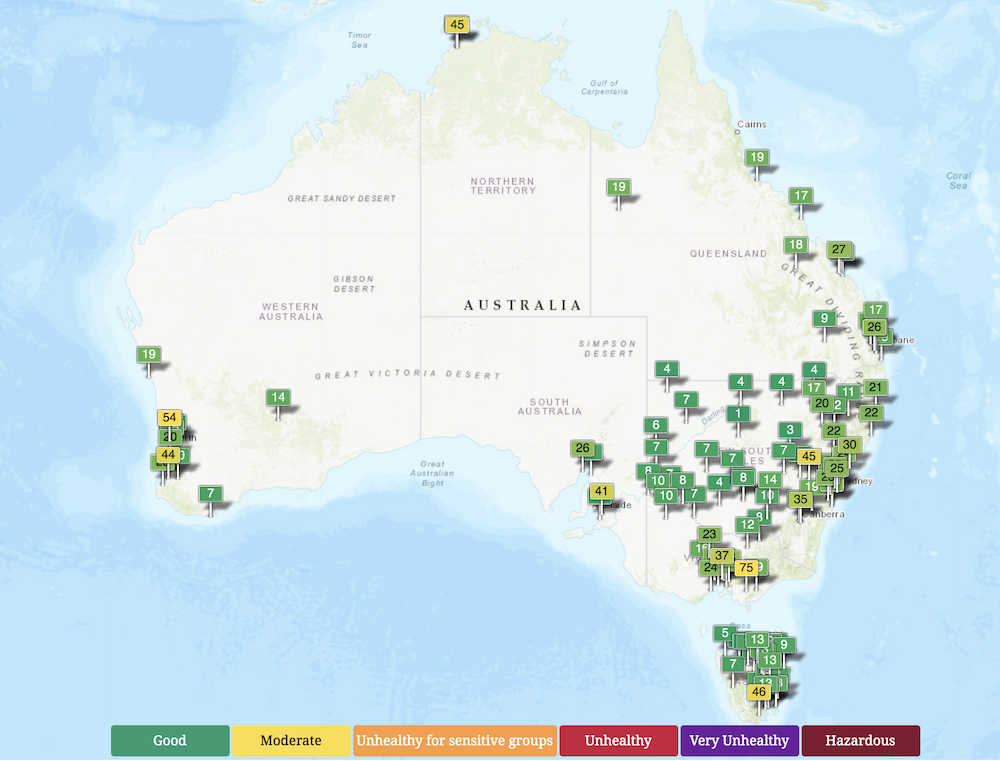