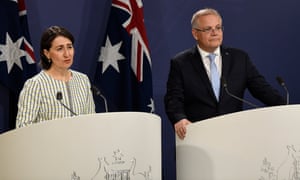 There are real conceptual and practical problems with the energy deal struck between the Morrison and Berejiklian governments which I’ll get to in a minute, but let’s start with the positive.

Despite Scott Morrison presenting to voters as a squat brick wall on climate change, engaging in his usual passive aggressive misdirections and his “shut up down the back, Dad is talking” shtick, the good news is this bilateral agreement represents a watershed of sorts.

Although the prime minister had to shout gas gas gas is GREAT (presumably to stop Matt Canavan moaning to the Courier Mail, or George Christensen threatening, then failing, to cross the floor because someone said renewable energy) Friday’s deal is two Coalition governments working together on a set of proposals that will, in time, deliver lower emissions in Australia. 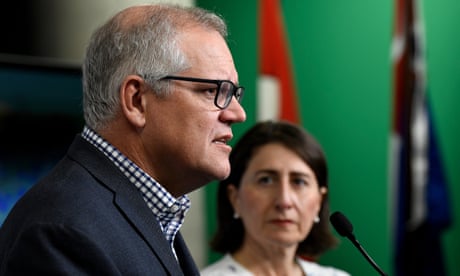 Just let that thought roll around in your head for a second or two: two Coalition governments underwriting transmission infrastructure that will activate renewable energy zones.

In the tortured history of the climate and energy debate in this country, this is not nothing. In some respects this is the sound of a reinforced dam wall cracking. Now the dam wall certainly hasn’t broken – let’s all breathe normally and avoid ridiculousness please – but there are some visible cracks in it.

Something else to know: with federal parliament about to resume after a punishing year that started and didn’t end courtesy of our summer of calamity, Liberals are talking among themselves about climate change, and how the Morrison government might reposition.

For the first time, at least to my ear, Liberals returning to Canberra are wondering how they can start to unwind the barefaced lies voters were told during the carbon “tax” period.

They are wondering how they can step up incrementally on mitigation while rolling out necessary adaptation proposals, without generating a revolt in parts of the base who happen to live in seats the Coalition needs to win government.

A little bit more to know. As well as pondering a complex repositioning challenge, there is considerable dissatisfaction around about the serially besieged energy minister, Angus Taylor. There’s that besieged problem of course, but also problematic is the view from some colleagues that Taylor is incapable of carrying a positive message on emissions reduction and energy transition.

So that’s some of the context sitting behind Friday’s announcement, which Morrison dressed up as a gas deal and Berejiklian dressed up as a green deal. The bedrock beneath the agreement is how can we, the conservative side of politics in Australia, crab-walk away from our wanton destruction of the past decade?

Now to the substance of the agreement.

Instead of having a clear, national policy mechanism to drive the transition to low emissions, a coherent framework to drive new investment in least-cost abatement, you have the equivalent of the mandated, Soviet-style, five-year plan. Except it’s not really a plan. Morrison doesn’t yet have the courage for a plan. It’s a set of propositions that might hold together, or might pull in different directions.

In the universe of policy by bilateral agreement, you have governments deciding which projects happen and don’t happen. Governments driving taxpayer-funded abatement and grid security strategies that will doubtless cost more than what would have been delivered by transparent market mechanisms which invite orderly market responses.

It never gets any less stupid where we find ourselves in 2020. But here we are, at the opening of a new decade, still camped out on Stupid Mountain with dwindling rations and exhausted patience.

It’s also odd to find ourselves back at the “gas is the transitional fuel of choice” argument (which Morrison articulated on Friday), given that was the argument (along with the “I know, let’s have nuclear energy” enterprise that remains a fixed point in sections of the right in Australia that can’t add up and can’t bear to mouth the words renewable energy) that drove the Liberals to accept carbon pricing back in 2007.

This argument is so retro that market participants are likely to chuckle and then roll right over the top of the talking point. Perhaps Morrison is trying to turn back time so we can leap right over the whole “axe the tax” period straight to sense and reason? Good luck if so. That’s a campaign we can all get behind. 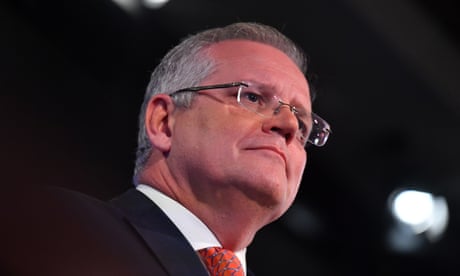 Australia already 'carrying its load' on emissions and must adapt to warmer climate, PM says

But with my humblest apologies for interrupting Dad while he’s talking (again), things have moved on from that period, the period where the Coalition mortgaged Australia’s future to win an election.

Gas prices are higher – a fact that was skipped over conveniently on Friday morning. As recently as December the Australian Energy Market Operator – the people who run the grid – noted the transition in the energy market would require more utility-scale pumped hydro and battery storage, demand management and distributed batteries participating as virtual power plants. There could, Aemo said cautiously, also be a role for flexible gas generators “if gas prices materially reduce”.

Another fact conveniently skipped over: the negative contribution fugitive emissions from gas production are making to Australia’s pollution problem right now. While gas peaking has a role in an energy transition urgent enough to require all options needed to be in the mix, more gas means more pollution, and there are valid alternatives that can be considered.

Circling back to the price issue, bringing more gas into the market should lower prices if the economic orthodoxy holds (although like everything it’s complicated), so let’s kick the tyres of that proposition quickly.

On Friday Morrison created the impression he wanted more gas in the market. More more more.

It’s worth pointing out that New South Wales under this agreement (according to the documents I’ve seen) will be required to “set a target to inject an additional 70 petajoules of gas per year into the NSW market”.

Here’s a couple of facts worth noting.

NSW already has two projects in development (the Port Kembla and the port of Newcastle gas import terminals) that are forecast to deliver more than 200 petajoules between them. I’m not a maths genius, but that slated contribution is obviously more than 70.

The contentious Narrabri project would deliver another 70-odd. So maybe Narrabri is triggered as a consequence of this deal, and maybe it isn’t, given the projects in development are already slated to deliver more than the allegedly “new” target.

There is a view in NSW that this element of the agreement is actually status quo, dressed up by Canberra as quantum leap, that Morrison – to manage his internals and externals – wants to wrap the state’s glorious green deal in brown paper.

I suspect that’s right, but this is one of the key areas to watch as the deal is rolled out.

We've got an announcement…

… on our progress as an organisation. In service of the escalating climate emergency, we have made an important decision – to renounce fossil fuel advertising, becoming the first major global news organisation to institute an outright ban on taking money from companies that extract fossil fuels.

In October we outlined our pledge: that the Guardian will give global heating, wildlife extinction and pollution the urgent attention and prominence they demand. This resonated with so many readers around the world. We promise to update you on the steps we take to hold ourselves accountable at this defining point in our lifetimes. With climate misinformation rife, and never more dangerous than now, the Guardian's accurate, authoritative reporting is vital – and we will not stay quiet.

We chose a different approach: to keep Guardian journalism open for all. We don't have a paywall because we believe everyone deserves access to factual information, regardless of where they live or what they can afford to pay.

Our editorial independence means we are free to investigate and challenge inaction by those in power. We will inform our readers about threats to the environment based on scientific facts, not driven by commercial or political interests. And we have made several important changes to our style guide to ensure the language we use accurately reflects the environmental emergency.

The Guardian believes that the problems we face on the climate crisis are systemic and that fundamental societal change is needed. We will keep reporting on the efforts of individuals and communities around the world who are fearlessly taking a stand for future generations and the preservation of human life on earth. We want their stories to inspire hope.

We hope you will consider supporting us today. We need your support to keep delivering quality journalism that’s open and independent.

Moved this over from another thread PlanB because I have nothing more to add. I think it is just another hoodwinking, manipulative exercise to pretend they are actually taking action for climate change when in fact they are doing nothing new and constructive.

Feel so angry about the deal Morrison has forged with the NSW Berejiklian government to frack more gas in effort to counter carbon emissions. More catering to mining industries, most of which are overseas companies which sell our gas overseas anyway. There is nothing new here, no vision for building our renewables industry. Do they not care about our water problem??? Gas fracking consumes massive amounts of water and carries the possibility of poisoning existing water sources. Gas also emits carbon so reduction of emissions will be minimal. More pandering to industry by Morrison and the LNP. Grrrr....

Thanks, Ny19, yes I agree both full of it and just lying -- do they ever do anything else -- they are treating us like idiots --

The way this creep   Morrison had lied all the time he has been in office -- not only as PM either -- with his darn smirk --that never leaves his face.  I see where China has bought even more mining in the Pilbara area --

You got that right with his damn smirk. When he put his hand up to be a PM he spouted off 114 promises if he was elected. How many has he done? FOUR yep 4.

I do not know if he still has it?

PlanB, I thought the land Barnaby Joyce owned was in the Pilliga near Narrabri/Gwabegar NSW, not the Pilbara in WA.

Read that he had it on the market in late 2018 to fund his divorce settlement.  It was farmland with coal-seam gas potential bought in 2007.

You got that right with his damn smirk. When he put his hand up to be a PM he spouted off 114 promises if he was elected. How many has he done? FOUR yep 4.