Immigration Minister Alex Hawke has used his ministerial powers to personally cancel Novak Djokovic's visa, after the tennis star won a court case earlier this week against his previous cancellation. Mr Hawke said he cancelled the visa on "health and good order grounds, on the basis that it was in the public interest to do so". 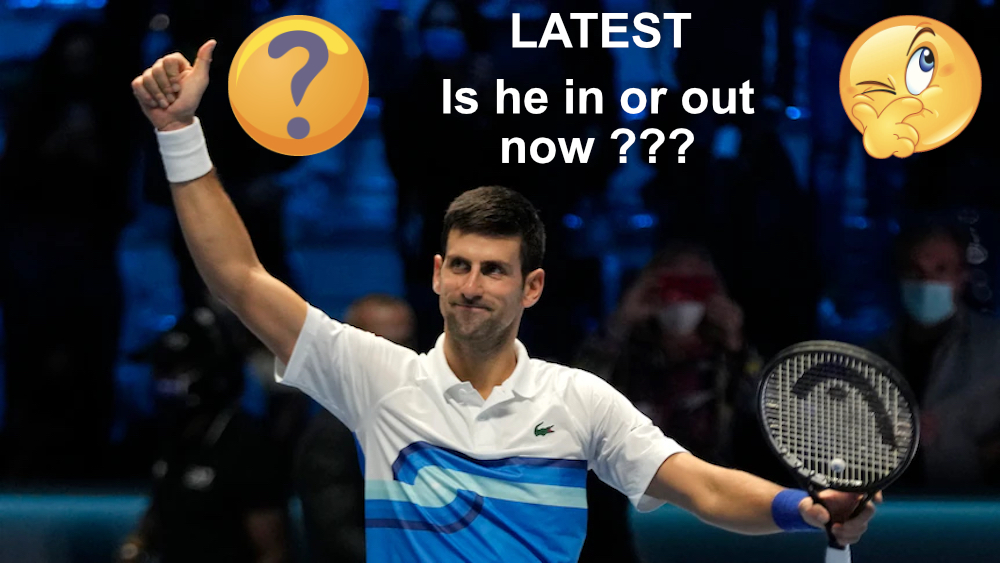 The tennis star's legal team has indicated they intend to file an injunction against the minister's decision in a bid to allow him to stay and play in the Australian Open.

Novak Djokovic will not be detained or deported tonight, but will be required to attend an interview with immigration officials in Melbourne at 8am tomorrow, a court has been told.

LOL   Australia is being laughed at RnR

The last 24 hours I have had international friends mention that Aust., should send him back, he certainly is not liked around the place from what I gather.  I have not been a follower of tennis for some years now.

I haven't been a follower for a long time either, since the smashing racquets of the McEnroe era.

I haven't been a follower for a long time either, since the smashing racquets of the McEnroe era.

Why doesn't he have the guts to say "We stuffed up, time to go"? The arrogance of the man permits him to keep going. Turning up for practice and going about the place like he is Mr. Popular. The longer he stays the more people will hate him., and shame on the Federal Government for not moving sooner to deport him.

During a hastily scheduled late-night hearing in the Federal Circuit Court on Friday, Judge Anthony Kelly ordered that the federal government not take any steps to remove Djokovic from Australia before the tennis star’s appeal is resolved. Judge Kelly said the case would be transferred to the Federal Court of Australia.

Djokovic attended an interview with federal officials at 8am this morning before he was detained by Australian border authorities.

In the Federal Court of Australia, Justice David O‘Callaghan’s procedural hearing on Saturday morning has now adjourned, with another hearing to be held at 9:30am AEDT on Sunday.

Djokovic will be transported to detention where he will spend the night in detainment until the outcome of the Sunday Federal Court hearing.

If his case is unsuccessful, the tennis great will be deported and he could be barred from receiving a new Australian visa for three years.

They say if he is unsuccessful, and told to leave, this will amount to the Serbian public causing great unrest , then again if he is allowed to stay, the Australian public will hollow blue murder.  They should smuggle him out of Australia, never to be seen again.

The Federal Court is now adjourning for the judges to consider their decision. Chief Justice James Allsop says the court may reconvene "this afternoon or perhaps tomorrow morning". 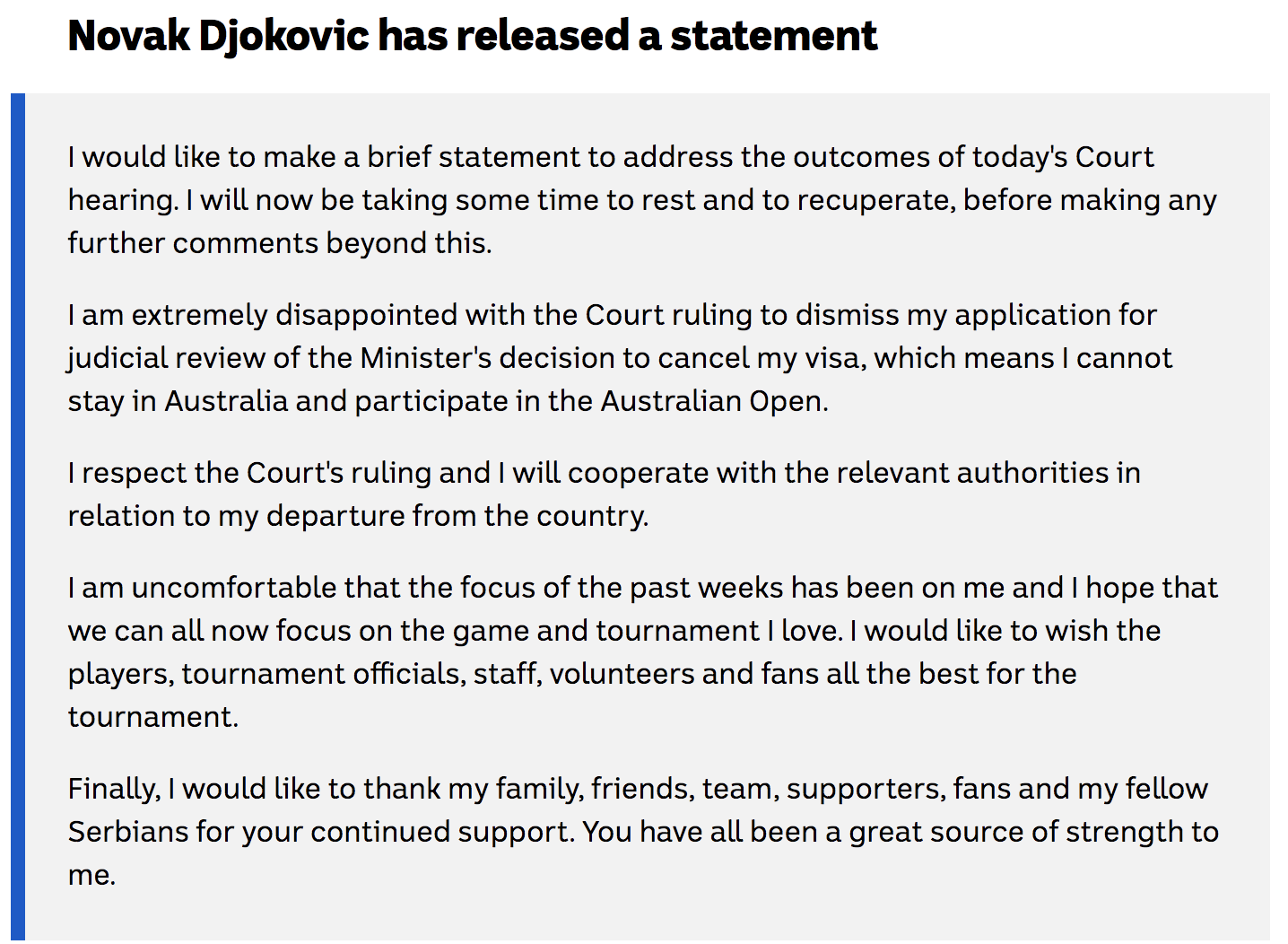 Because the French government will not allow unvaccinated players into  their country, what will Djokovic

Novak Djokovic has flown out of Australia.

Glad to see him go. The only reason his mother knew about the food and conditions he was in, is the phone call(s) he made to her. Sorry, but Australians see that as a "mummy's Boy" and a spoiled one at that.

Quote He said Australia's treatment of the tennis star during his 10-day stay amounted to torture – echoing comments he made in an Instagram video posted on Friday. "It was not only intellectual but physical torture against Novak Djokovic," Mr Vucic said.

Hey what? Send Mummy's boy to China and see what torture really is.

Not a good global opinion of Serbia, looks like they are are wimps.

This could have been resolved if he had just told the truth instead of fudging his forms to enter Australia. His bluff was an epic fail. Now we can all concentrate on the real men/women of tennis - children not allowed!

Good riddance to the spoilt brat

I agree, won't get an argument from me.

But I do feel for the other players, they were made to be like pawns to the Djokovics Chess game, and also made to feel worthless against the great and almighty Novak. (He's a damn legend in his own mind.) Not even going to head home - he's at Dubai. France and Spain want him too because of some Covid details. Not a well liked person anymore.

The 51-year-old - who is commentating on his 18th Australian Open this year - said the tennis world would be in a better place if the unvaccinated star had stayed in Serbia and not flown to Australia. 'Ultimately everyone involved here has lost,' the four-time Grand Slam winner said on Channel Nine's Australian Open commentary on Monday. 'But it would have been so much better if Novak had never come here - for him and the whole of tennis.' Djokovic was deported from Australia on Sunday night and will be banned from re-entering for three years after a federal court upheld the decision to cancel his visa. Courier said he wanted to know why Djokovic - who was granted an exemption to vaccine requirements as he had recently contracted Covid - was allowed to enter Australia earlier this month

Why give him the time of day?