NBN Co has admitted in a court-enforceable undertaking to the ACCC that it misled Canberra consumers who lived in areas where the NBN was operating into thinking that their telephone and internet services supplied over the TransACT Network would be disconnected if they did not move to the NBN.

Between January and 11 July 2019, NBN Co sent multiple letters to consumers and businesses across Canberra stating that they needed to move to the NBN or they would face the prospect of losing services. This advice was incorrect for more than 20,000 premises connected to the TransACT VDSL2 Network.

As part of the undertaking, NBN Co has committed to reimburse the early termination costs paid by consumers and businesses that moved to NBN Co before 10 July 2019, and then chose to return to the TransACT Network.

NBN Co has also undertaken to publish corrective notices in the Canberra Times, through a paid Facebook advertisement and on the NBN Co website, as well as to make a contribution towards the costs incurred by TransACT in seeking to correct the misleading communications.

“It is unacceptable for NBN Co to tell consumers on other broadband networks such as the TransACT Network that moving to the NBN is their only option, when that is just not correct,” ACCC Chair Rod Sims said.

“Moving to the NBN is an important decision and it can be confusing. Consumers should be able to trust that NBN Co is providing them with accurate information.

“The ACCC will not hesitate to seek high penalties in court against NBN, and other telcos, if we see this type of conduct again.”

NBN Co has also committed to establish safeguards against repeating this conduct.

Have you been forced onto the NBN? How do you rate the service if you use it?

The Thinker
1 yr ago

The ACCC only looks after those in the ACT? This has been happened nationally not just in the ACT.

I still get phone calls from "Nicole at NBN" telling me I will be diconnected if I don't move over to the NBN.  I Did that move almost 2 years ago.  The whole thing has been a compete schemozzle, but my service is at least reliable now, unlike it had been for years before the NBN was connected.  Although the landline is questionable and stops working at times.  I still need it because my mobile coverage at home is iffy, and I have a medical condition.  Fun times!

At least now I am getting the service which I pay premium price for - well most of the time anyway.  But it costs me an extra 40 a month on top of what I was paying before.  Just have to suck it up I guess......Telstra provides the best coverage for the area I live in.....wonder what the 5G network will do to it all?

'Nicole of the NbN' also tried it on down here in Tasmania. Try leaving the telephone line engaged after the call, it should cost them.  or use an ACMA THUNDERER when the automated call is delivered.

'Nicole of the NbN' also tried it on down here in Tasmania. Try leaving the telephone line engaged after the call, it should cost them.  or use an ACMA THUNDERER when the automated call is delivered. 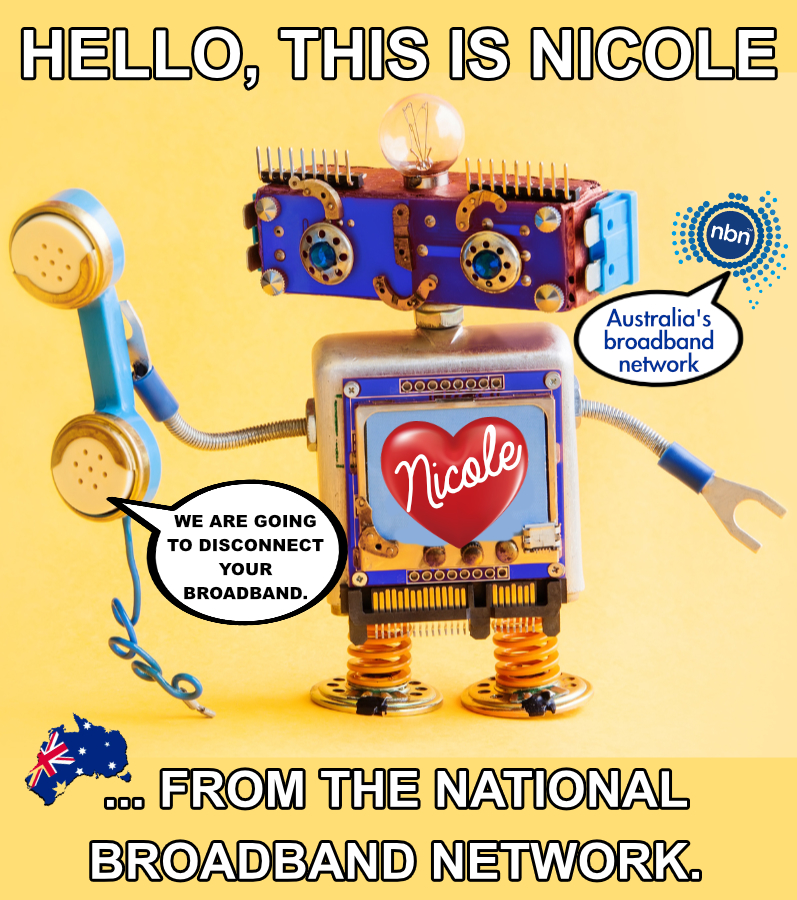 This is how I picture her. Calls me a lot!!

Unfortunately NBN who should be the the organisation we call about Internet Issue's, force us to deal with the "Provider" our Telco.

To me it is the same as Acme food company having a faulty product and expecting the supermarket who had it on their shelf and from who I purchased it to be responsible for any faut in the product.

Lately about 1 day a week everything is very slow,everything takes too long to open can't be the laptop otherwise it would happen everyay, only other to blame is microsoft.  No ption but to change to NBN.  Overall I don't think it was as good as the old system

I got a message in the ost today telling me

Weér 5G ready are you?

Who did you get the message from?

5G coverage appears to be very limited at the moment according to Telstra's map ...

More about coverage areas from other providers at ...

This was an add for Optu5G

All the best PlanB, whatever you decide.

Doing OK now with my current system ... NBN FTTN landline connection + substantial mobile data back-up for any landline outages. Seldom had to use the moblile back-up, only in scant power outages.