Sign In
The Meeting Place > Travellers Corner > Meet you in Tokyo.

Meet you in Tokyo.

If anyone’s got the travel bug, it’s Anthony Bourdain.

The renowned TV chef is constantly on the move, sampling culinary delights around the the world, from the crevices of the Congo to the streets of Sicily.

It’s safe to say the man knows his waffles from his wanderlust. Now, the US presenter has revealed the one place in the world he’d settle down.

Bourdain explained that his fascination with all things Japanese has always drawn him to Tokyo.

Interestingly, his reasoning has little to do with food.

Bourdain developed an obsession with the Japanese capital from his very first visit, admitting that it completely changed his life.

He expressed huge admiration of the intense discipline required for so many Japanese practises, such as Tebori and flower arranging, which he personally feels he lacks.

Bourdain explained that the attention to detail that these activities require can be enriching, allowing you to focus on the basic elements of what it means to experience pleasure.

Meet you in Tokyo.

I love Bourdains programmes .No Reservations is on SBS Netflix U Tube

It beats me that he can eat and drink just about everything, and never seems to put on weight.

We don’t know how much he eats overall or how active he is.

But he certainly makes a great program and his interest in Japan is interesting .

The Japanese diet is very healthy for the area I am interested in of extending healthy life span. 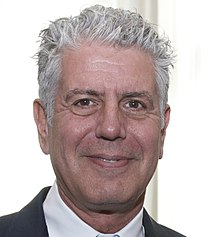 He is a 1978 graduate of the Culinary Institute of America and a veteran of numerous professional kitchens, including many years as executive chef at Brasserie Les Halles. He has been noted as one of the most influential chefs in the world.[1][2][3][4][5] He first became known for his 2000 book Kitchen Confidential: Adventures in the Culinary Underbelly. His first food and world-travel television show was A Cook's Tour, which ran for 35 episodes on the Food Network from 2002 through 2003. In 2005 he began hosting the Travel Channel's culinary and cultural adventure programs Anthony Bourdain: No Reservations (2005–2012) and The Layover (2011–2013). In 2013, he switched to CNN to host Anthony Bourdain: Parts Unknown.

Though best known for his culinary achievements and television presentations, along with several books on food and cooking, Bourdain's lesser-known writings include both fiction and non-fiction.