Sign In
The Meeting Place > Travellers Corner > How many Australians are actually returning home?

How many Australians are actually returning home?

The number of overseas arrivals into Australia increased by 18 per cent in December 2020, reaching 35,100 people, according to provisional data released this week by the Australian Bureau of Statistics (ABS).

"We are continuing to see steady month on month increases in arrivals," Ms Dobak said.

"The increase in December overseas arrivals is consistent with the lifting of travel caps on international arrivals in late 2020, as well as the opening of a one-way travel arrangement from New Zealand.

"In Victoria, the lifting of restrictions saw over 5300 overseas arrivals in December compared with just over 500 in the previous month.

"Despite these increases to monthly arrivals, overall travel numbers still remain very low, with December arrivals down 98 per cent from this time last year."

Should the government be doing more to bring stranded Australians home?

Too many from India Ben!

Indian families are told to bury their dead in their back gardens as crematoriums buckle under strain of record Covid surge that saw 350,000 cases in one day 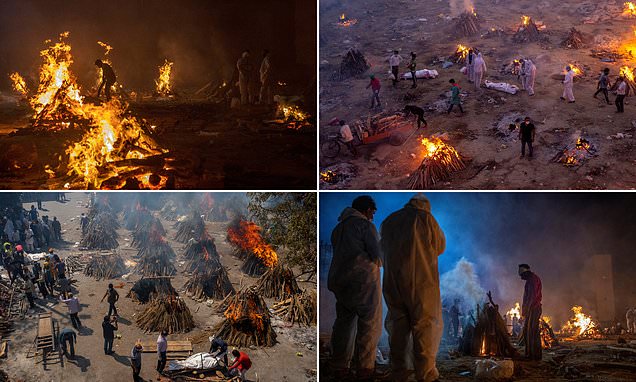 India's surging Covid second wave has so overwhelmed crematoriums that grieving families are being forced to burn victims in their own gardens. The country announced a record 349,661 infections and 2,767 deaths in the past 24 hours and bodies are continuing to pile up, with experts predicting the surge to continue for weeks. In Delhi, 348 deaths were recorded on Friday, one every four minutes, and in the southern state of Karnataka, the government has been forced to allow families to cremate or bury victims in their own farms, land or gardens. The home ceremonies have to comply with health guidelines but it is hoped the move will ease the pressure on crematoriums and grave diggers.

Celia - That must be awful if the people have to burn family members in their backyards, and the smell would be horrific. I wonder if that includes burning bodies on the Ganges River, or maybe that's a religious custom.

Yes Hola a nightmare;  one wonders how it came to this, what do does the Government in India do to care for the poor and weak in that country?

What does the country do with the foreign funds the international countries give them?

By the look of it not much except to spend it on space travel!

What do the Billionaires do with their money to help the poor, nothing by the look of it.

Not sure how many are going back to the UK for a holiday and returning, but I wish they wouldn't till this Pandemic is over with.  We are from the UK and I would not dream of going back while there is a pandemic and risk bringing the virus back into the country that is plain selfish.

In 2020, more than 7.6 million people living in Australia were born overseas, with those born in England continuing to be the largest group, according to new data released by the Australian Bureau of Statistics (ABS).

ABS Director of Migration Statistics, Jenny Dobak said that 30 per cent of Australia's resident population were born overseas as at June 2020. This compares to 28 per cent in 2015 and 27 per cent 10 years ago.

The table below shows the 10 largest groups of overseas-born residents in 2020, and compares change over time. 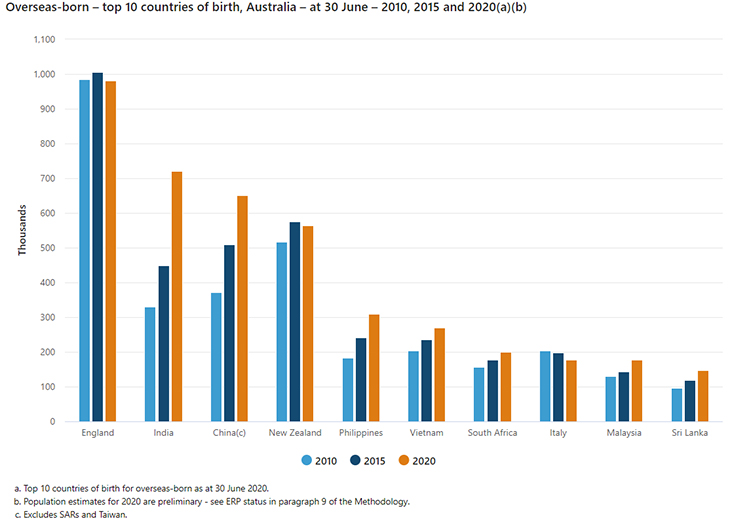 In the year to 30 June 2020, preliminary migration estimates recorded that 510,000 people arrived to live in Australia, while 315,000 people left Australia to live overseas, the most departures ever recorded.

There were a record 99,000 Australian citizens returning after living overseas in 2019-20, the greatest number of returns ever recorded. In the same year, over 61,000 Australians emigrated, a decline of 29 per cent from one year earlier. These changes likely reflect impacts from COVID-19.

Why do you think so many Australians left to live overseas last financial year?

Perth hangs in the balance: 50/50 chance snap Covid-19 lockdown will be extended or even strengthened for two million Aussies - as Mark McGowan reveals strict rules will remain regardless of cases

State head of the Australian Medical Association Dr Andrew Miller predicts there is a 50/50 chance the lockdown will be extended as hundreds of close contacts await test results.

I just heard the Australian Cricket Team are wanting to charter a plane to come back to Australia. Why did they have to go in the first place? money, money,money. A couple of them decided to fly out on their own. I hope they don't expect the Aust. Gov. to help them.

RnR has the new rules for those that have decided to come back to Australia from India unannounced!

Legal challenges loom after Australian government bans citizens returning from IndiaNino Bucci and Paul Karp  1 hour ago Lawyers expect that a legal case challenging the India travel ban could be filed within days, despite the federal health minister, Greg Hunt, saying it was his “absolute belief” the measure was lawful.

Hunt announced a potential five-year jail term and $66,000 fine late on Friday, in a dramatic escalation of the flight bans implemented a week earlier.

Marque Lawyers’ managing principal, Michael Bradley, told Guardian Australia his firm was “actively looking into” a legal challenge and he considered the prospect of a court case over the India travel ban “pretty likely”.

Bradley said Marque had been approached by an Indian Australia family with the parents currently in Australia and grandparents who had taken their three-year-old grandchild to India for a visit in February 2020 before Australia insisted citizens and permanent residents return home in March 2020. They are now unable to return.

© Photograph: Wallace Woon/EPA Lawyers say challenges to the government’s ban on Australians returning from India could be filed within days.

Bradley said the fact the determination expires on 15 May and could be revoked adds a degree of urgency.

The Grata Fund, which supports public interest litigation, has also been contacted about mounting a legal challenge to the ban.

“There is an enormous amount of distress about the Morrison government’s India travel ban in our community,” Isabelle Reinecke, the fund’s founder and executive director, said.

“We’ve received a lot of inquiries about potential legal challenges over the weekend, which we’re working through now.”

Hugh de Kretser, the executive director of the Human Rights Law Centre, said the centre had also been contacted directly by people in India interested in a case.

The fact the ban could expire before a legal case is mounted – and certainly before any case is finalised – was not necessarily a reason to abandon a challenge, he said.

Aside from potential challenges on administrative and constitutional grounds, there is the prospect that the ban could fail because it breaches Australia’s obligations under international law.

Related: My Australian husband is stuck in India. All I want is to know he can come home | Narita Nagin

“We’re obviously concerned about the precedent of imposing potential jail terms on a citizen for coming home,” De Kretser said.

“That has ... a direct impact on people that are affected now, [but] what you want is to make sure governments can’t use that blunt and harmful tool in the future as well as making sure governments are doing the right thing by their citizens now.”

Another senior lawyer who spoke to Guardian Australia declined to comment because he expected to be engaged to act in an impending case.

Hunt sought to reassure Australians on Monday that the determination to make it an offence for anyone to enter Australia within two weeks of being in India is legal, saying it was “our strong, clear, absolute belief” that it was.

“One of the things here is that we have been very measured. There are many orders which have been put in place, in particular under the Biosecurity Act,” he said.

“The strong, clear view is that there has been no doubt in any of the commonwealth advice about this measure or other measures.”

Awkward situation to be in, however, in a Pandemic one would think you would wish to keep your family safe, your spouse safe and not go flying around a planet that is in peril.