Two darts competitors are accusing each other of using farting as a distraction technique.

World champion Gary Anderson beat Dutchman Wesley Harms in the quarter finals, with Harms accusing his opponent of “leaving a fragrant smell” on the stage during their clash.

“It’ll take me two nights to lose this smell from my nose,” Harms told Dutch television after the match.

However, world number four Anderson was adamant that he had nothing to do with the smell.

After the smell become apparent, Harms improved, leading Anderson to believe that the Dutchman was the culprit.

"It was bad. It was a stink. Then he started to play better and I thought he must have needed to get some wind out,” Anderson said.

"Normally if I fart on stage I s*** myself, and you know that because I told you in a documentary," Anderson added.

Where is the least appropriate place you have ever broken wind?

I always blame the dog

I’ve always been very wary of people who fart and dart.

The competition is becoming fartoo intense.

Unfortunately I am in the minority of people who fart before I know it's coming.  I have absolutely no control over it and it is extremely embarrassing.  I feel for people in the same boat.

Have you had your PH level tested? Get your PH right and you'll come up smelling like roses.

Least appropriate place? I knew a guy who once dropped a Big Whopper in church but it wasn't from Hungry Jacks.

Was it from Alan Bondage?? 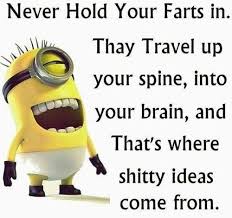 That advice is for you LJ.

Paranoia setting in Davy? Insulting LJ a member that's not hereabouts right now. How typical of a pumped up pipsqueak such as yourself. In real life you'd go to water and run a mile, but you are a hero hiding behind your computer, a legend in your own lunchtime.

Don’t worry sagie, your secret is safe with me. Davy? The Scottish Davy? Gotta laugh.  Ay caramba I’m getting real scared of you now, good thing I’ve got my screen to protect me! Here’s a song for you sagebush, glad to see you’re not afraid to let your inner self out on occasion, hahaha

heavens above,   first,  MICHA and  the mob were calling everyone they didnt know either they were PETE,     RALPH,    now SAGEMAN is DAVY,    it would be funny if not so pathetic,     you would be better of MICKY,  sorting ypour own crowd out,   as to who is who,   and leaving others alone,    unless you have something constructive to say,    and i dont think that day will ever come,

Well I've always resisted the urge to open links of any kind- too many scammers ready to drop some malware into the works. So I won't open yours. Hope you understand, so don't bother again. Will leave it to others if they can be bothered. Over and Out.

sageman - Don't give up, we all have something to contribute. I had some nasty things said to me years ago, thank goodness those members have now been banned. I always had a laugh when we were planning our trip with Cats. Unfortunately we have lost some decent people along the way because of the rudeness.

Rudeness Hola? Have you looked at the Fame/success thread to see who started the rudeness??? Or are you blind to some sort of behaviours?? It appears you approve of rudeness from your mates, but when the victims of the rudeness respond, you come out in sympathy. You surprise me.

Ray - Don't go judging me. I was not talking of the posters here, but others, and they know who they are. I'm not a Mother Theresa, or a shrinking violet but I don't see any reason to start a fight with you or anyone else. I respect your thoughts and please respect mine.

They obviously do know who they are Hola, and should be totally ashamed of their infantile behaviour.

Now that Ray has disowned you Hola, only a mattter of thime the other personalities do the same

Lothario is right Hola, the others will begin their rudeness and abuse shortly.

Cannot help but wonder as to how different is farting to screaching and belching in tennis by some female players ... is it just not another technique to distract the opponent ???

It certainly has put me off watching female tennis.

No Suze, it has been proven that screaming produces a more powerful shot. There has been research with positive results. Weight lifters were asked to lift as per usual, then again but this time saying a swear word beginning with 'F'. The results were quite conclusive. When the F word was used PBs were broken in the majority of case studies.

Hi HOLA, now don't think for a minute that I would give up as a result of the Infantile behavour such as even Adrianus has noticed. I'm just giving the moronic thickwits that particular hope , including that idiotic brain dead raybird you know the sickening sycophant whose fawning posts to his master (the one with sociopathic tendencies) would likely make anyone puke! What an unmanly dickhead he is, only capable of attacking women on this site such as yourself, the word CATARTICO comes to mind. C'mon raybird attack me if you have the guts! But be warned I will run rings around you like I did last time and your nonna won't be always there to fight your battles. You will be no contest for me you slimy one eyed backslapper. Your lot were useless in WW2 and threw the towel in at every opportunity.So go ahead make my day!

Per favore, I don’t want to keep you waiting for a reply sagman, you might bring out the handcuffs and bullwhip and run rings around me LOL 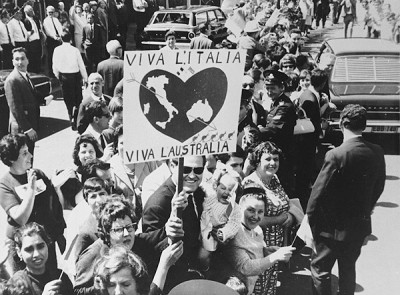 Freddie Mercury must have been a great influence on sagebush's life..

Btw Ray, my thanks to all Australian Italians for their help in building this country and for the music, food and amore they gave to the world.

Thanks Micha, and don't forget who gave the world Michelangelo's "David" 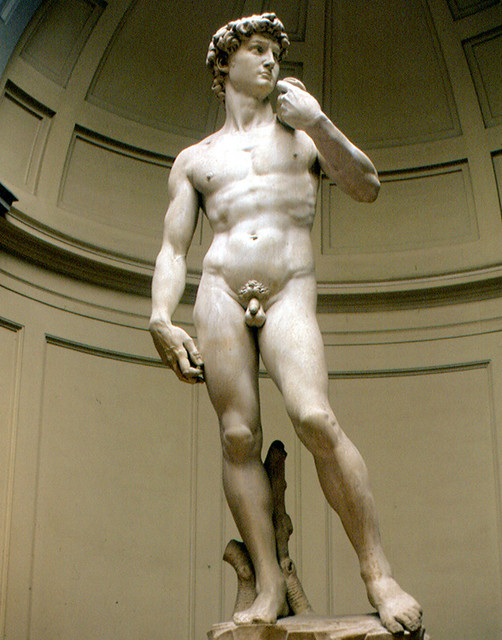 And the Mona Lisa, another Italian treasure Ray 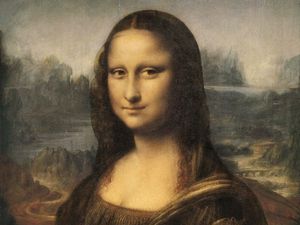 Obviously, like Lottie, sagebrush has no class or culture.

Beats me why sageman hates Italians??? Something to do with the war, and I wasn't even born then.

He's probably reliving his past Ray. He did say he likes to "live dangerously".

Here's to good health, off to have my tucker, watch a video with the family and early to bed, big day tomorrow. See ya my friend!

hahaha. I bet this thread got a lota clicks!

That's a nice looking full bodied drop Micha. Where do you buy your CabSav?

Bro, I make my own CabSav, bottle it myself and drink it myself.

I usually chain a bottle to my “old ornate iron bedstead” so I’ll have something to drink after satisfying my carnal pleasures.

Yeah, but how do you go about making your own CabSav mate?

Easy, first up, my bro in law and I drive to the neighbouring farm, get their cut price grapes (that’s him driving)

Then we crush them,

Even the wives help out

Then we bottle it, the best CabSav and enough for the entire street!

Jeez, you’ve  made my day Micha, exactly how my nonna e nonno used to do it.

Haven’t had home made vino in a while, if you have an excess, remember who your friends are. Eh!

your bro in law is a lousy driver pal.

Yep, he used to drive a logging truck along the North Yungas Road in Bolivia, hasn't passed his driving test yet.

Sure mate, I'll save you some, got some bottles with your name on it. Gotta love ya and leave ya mon ami, about to watch a late movie. Last night it was Sands of the Kalahari. Tonight it’s Desert Song followed by Adventure in the Sahara. Hab a gutn avent, that’s Yiddish for have a good evening, John Boy! 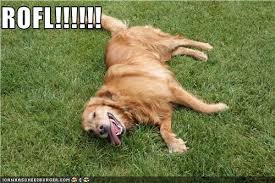 You intimated that you had class and culture by arrogantly stating that I had none. What makes you think that micha? It's  plain to see that you alone are deficient in those categories. One example is that you constantly regale us with the news that you are going for a "cab sav" and you think that somehow that makes you look classy? Got news for you just about everyone who likes wine drinks that. There's one difference though because you never seem to say what type of cabernet sauvignon you drink. I circulate with friends who have collections of Penfolds Grange and even the older Penfolds Grange Hermitage and as any knowledgeable wine lover knows that is one classy drink. One friend has a dozen or so old vintage Grange which are stored in a specially reinforced room because they would fetch around $1000 per bottle at auction. We have "Hill of Grace' wine too and that is superlative as well.  My collection of various vintage Penfolds wines some of which date back to the1990s would be worth a "pretty penny" now, However I'm a drinker not an investor. We have all attended wine appreciation classes and attend wine tastings on occasion as well. We are not wine snobs by any means but we would never use the term "cab sav" not that we have even discussed using that term at all, it just seems that it doesn't do justice as a description of a fine wine. and might be used by people who splash their "cab sav" on their snags at a barbecue. Your illustration of wine pouring appears to be from McGuigans wines, not a bad drop at all, but not particularly exceptional. Costs around $25-$30 a bottle in a wine shop. I guess what I'm saying is that please don't think you are impressing us with your never ending comments of your " cab sav" drinking episodes and illustrations of glasses of wine, including toasts to your like minded less than classy pals, and believing that somehow it illustrates that you have a grand lifestyle, as it is a bit crass I believe. I would imagine that some YLC members with an in depth knowledge of wine greater than yourself would find it a bit childish and naive in the extreme and in no way be evidence of class at all.

You appear to have a lot of time on your hands sageman..and that can be very boring..may I make a suggestion...

Go and do something useful..

Men's sheds have a lot to offer too Sophie. This one makes toy trucks. Maybe sage would enjoy it. 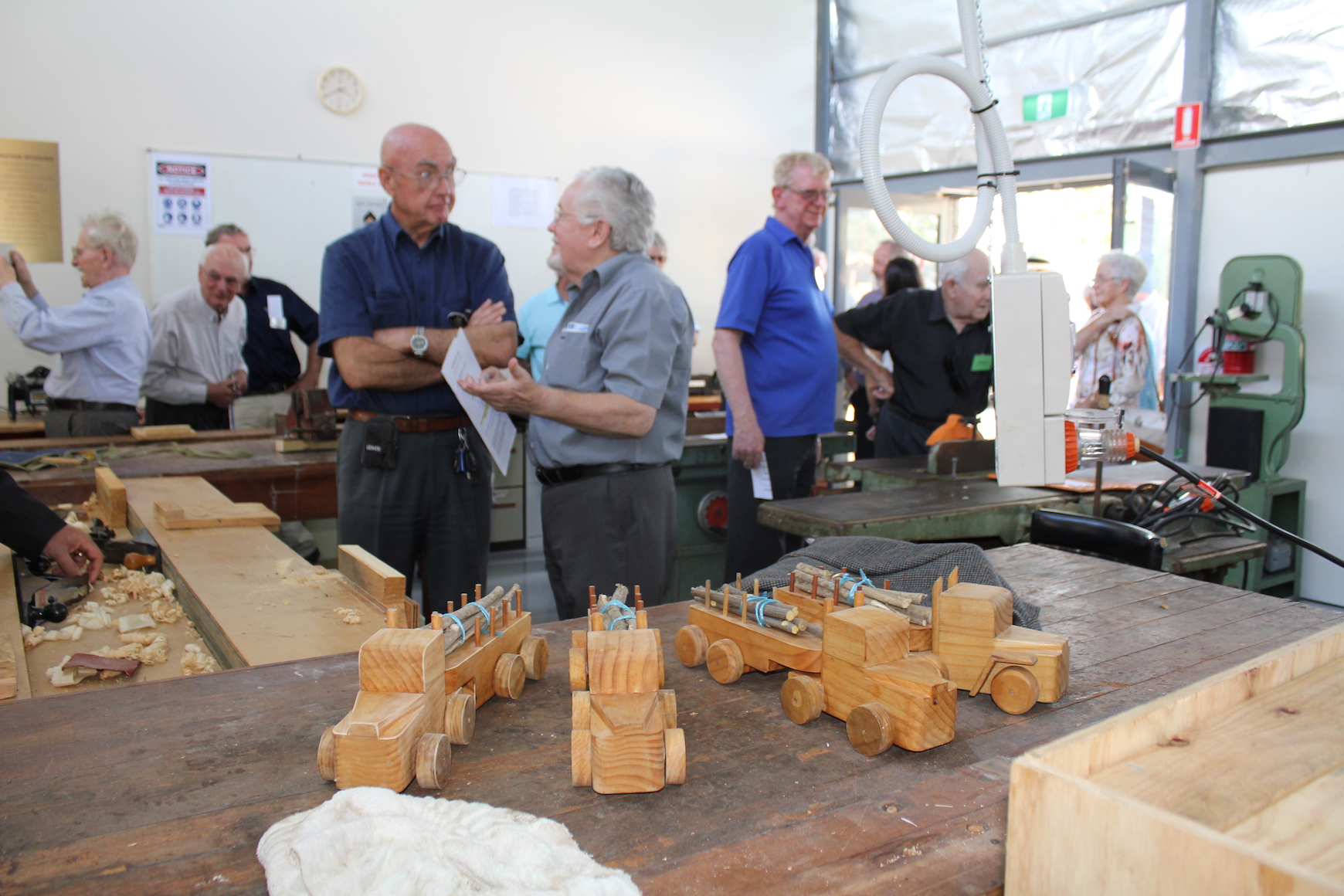