Sign In
The Meeting Place > Hot Topics > Children of the world

Children of the world

The drama of Peru's Covid orphans 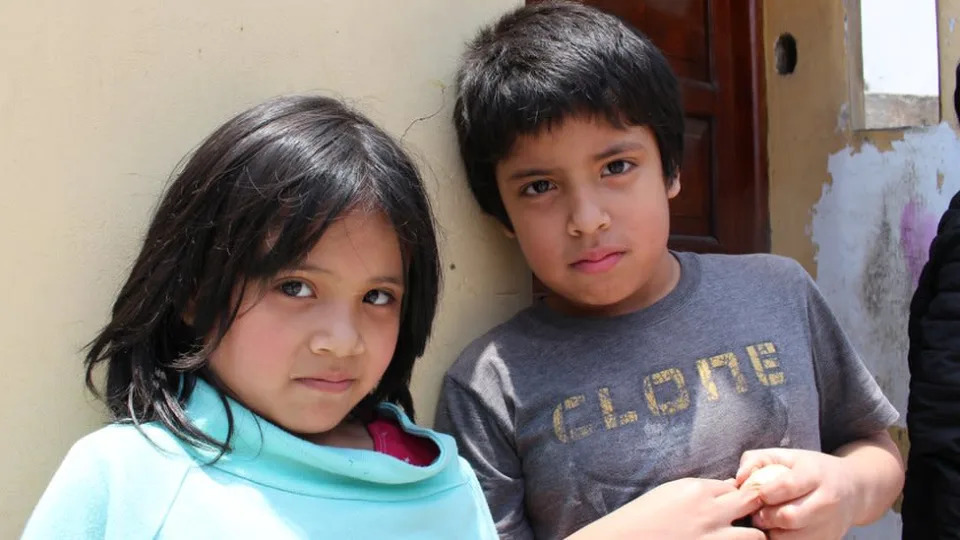 Katherine's children, like many others, find it hard to talk about their late mother

In a tiny house on the outskirts of Lima, Gabriela Zarate lives with her husband and eight children. Four are her own. The other four, two girls aged seven and 15, and two boys aged nine and 12, are the children of her younger sister, Katherine.

It is hard to squeeze them all in. The boys sleep two to a bunk bed, with the girls sharing a tiny room at the back of the house. "It's always been a struggle to put food on the table for my family," Gabriela says, "and with four more children it's even more difficult".

In June 2020, when Peru was already struggling to contain Covid-19, Katherine got infected. Hospitals were overcrowded, supplies had run out and relatives watched their loved ones die, unable to help.

When Katherine was turned away by doctors, Gabriela was left with no other option than take her home. Katherine was laid out on a mattress. She struggled to breathe, but her family did not have enough money to give her oxygen. They all watched Katherine, who was 29, get weaker and weaker.

A week later she died.

One of the last things Katherine did was to ask Gabriela to look after her children. Their father suffers from health and addiction problems, and is in and out of their lives. Katherine did not want them to end up in a children's home, so Gabriela agreed to care for them.

It has not been easy. When the government imposed a strict stay-at-home order during the worst waves of the pandemic, they were left wondering what they would do. "I used to drive a motor taxi and sell sweets out on the streets," Gabriela says. "But then we were told to stay at home, and I got worried: How were we going to feed them all?" 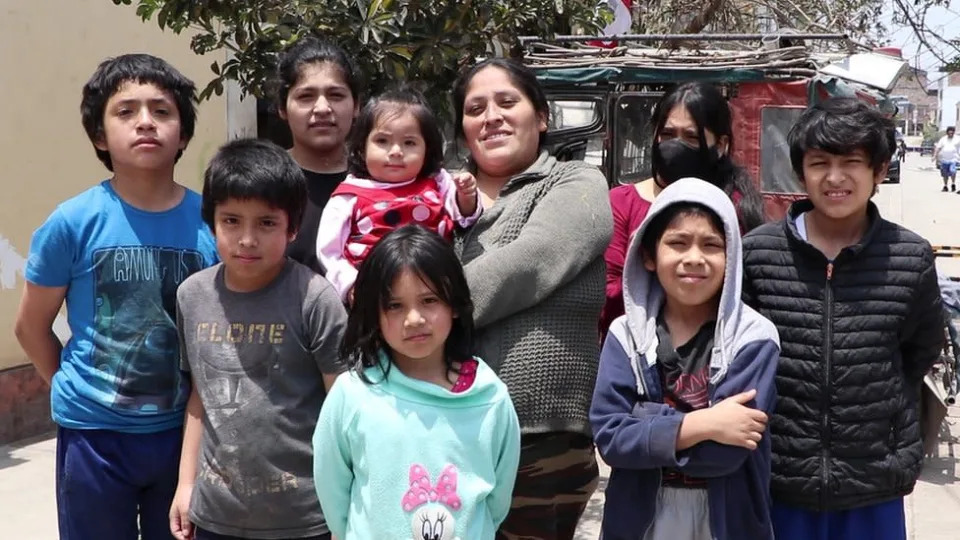 Gabriela now takes care of eight children: four of her own and the other four of her sister, Katherine

To earn some money, her partner started to deliver food to people during the curfew, which was illegal. That is when he, too, got Covid-19 and could no longer work. "We were very scared he might die," she says, "but in the end he recovered."

During the worst times, when neither of them could go out to work, Gabriela hung a white flag outside her house to show she needed support. Neighbours then started to bring her sacks of potatoes and other food.

Peru has been battered by Covid-19, with more than 202,500 deaths in a population of under 33 million. One of the most tragic effects of the pandemic here is the number of children who have been left without a mother, father, or some other caregiver.

There are at least 93,000 of them, according to the medical journal The Lancet. And even though one of their parents might still be alive, they are referred to as "Covid orphans".

Many face a daily struggle to survive. Financially and emotionally too.

Katherine's children, like many others, find it hard to talk about their mother. Her 15-year-old daughter watched her die, and Gabriela says she is traumatized. She will not talk about what happened to anyone.

The sons remember her wistfully. "I miss my mother," Katherine's nine-year-old son says. "She used to take us out onto the streets to play with us." 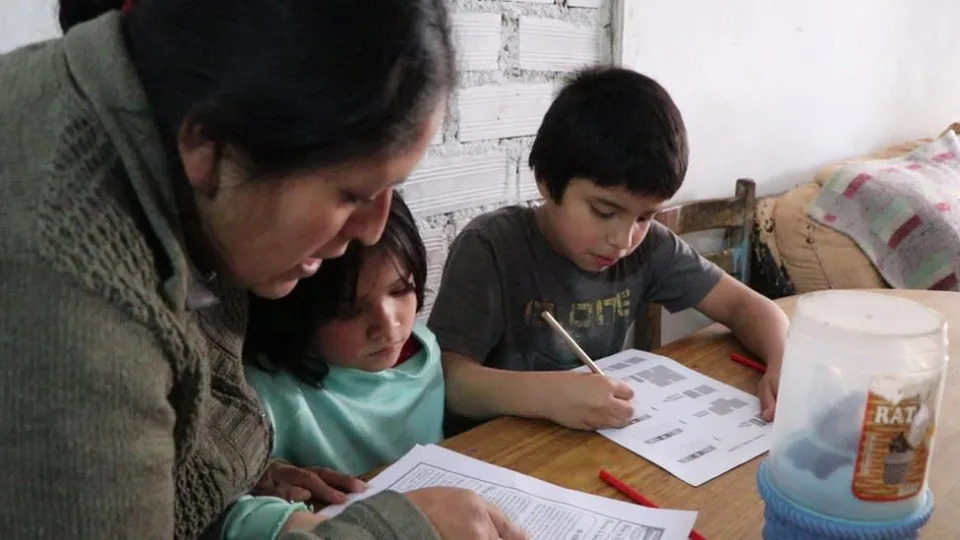 The children are doing online classes for two days a week 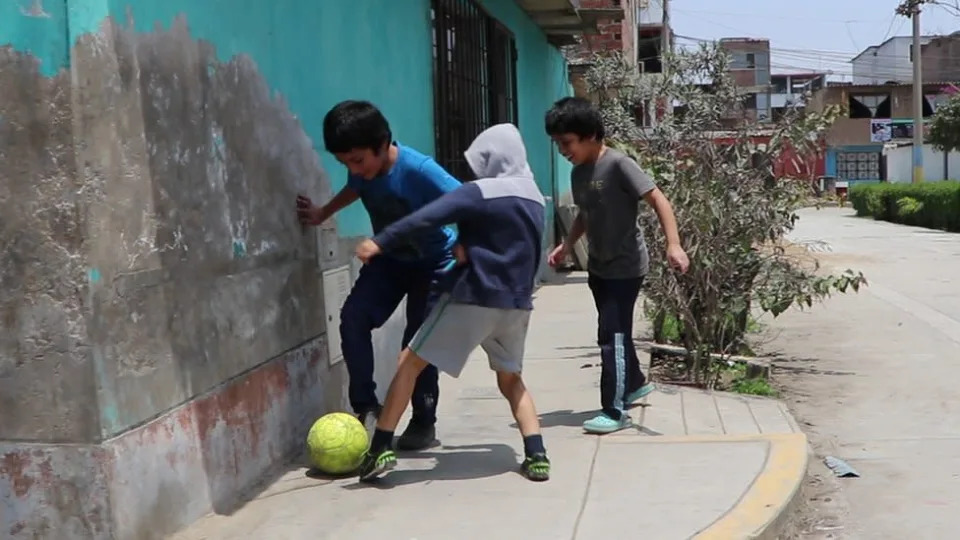 Despite missing their mother, the children say they like living with their aunt

Helping children like them is an issue which professionals like Andrea Ramos are trying to tackle. She is a social worker for the local council in two poor areas of Lima. Her desk is piled high with paperwork, and she relies on locals to get in touch with her via WhatsApp to flag up who needs help.

Poverty, she says, is getting worse due to rising unemployment because of the pandemic. This, in turn, is leading to more frustration and violence at home.

"We have a lot of children with mental health issues who are scared to go out because they have been shut inside during the worst waves of the pandemic," she says.

There are workshops to help families cope with children being at home all day long with on-line classes, and how to resolve fights and keep tempers under control. 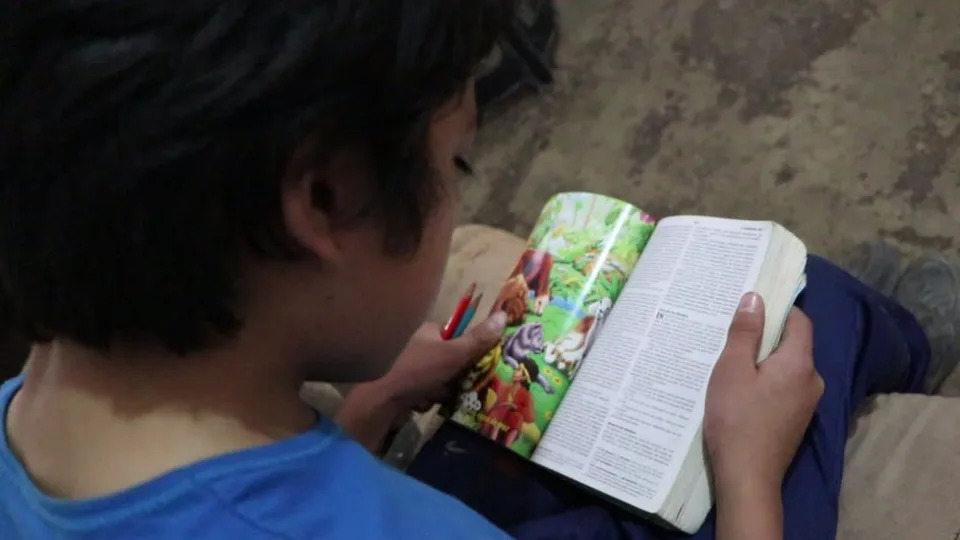 For some families, life is slowly getting better. Gabriela now receives a government-approved Covid pension for each of her nephews and nieces. It is only around $50 (£37) a month per child, but it means she can afford to buy extra food for them, and to print out pages for their homework.

The children are doing online classes for two days a week. It is difficult to find space for everyone. Despite missing their mother, they say they like living with their aunt. It is fun to play football out on the street with their cousins even though they end up arguing sometimes.

Although professionals like Andrea are concerned about the long-term effects the pandemic will have on "Covid orphans", Gabriela's nephews and nieces are ambitious for their future. The eldest girl wants to be a lawyer, the two boys policemen and the little girl a doctor.

How have Australian children been affected by the Virus?

More children can get COVID-19 vaccine from tomorrow

From tomorrow, children aged between five and 11 will be eligible to get the COVID-19 vaccine as the Morrison Government ramps up its efforts to get all Australians vaccinated.

Despite concerns over appointment availabilities, Health Minister Greg Hunt has assured there are plenty of vaccines available to go around for children in this age group.

"We have a population of approximately 2.3 million children in the five to 11 age group, with three million doses available over January and two million over the course of the next two weeks," Mr Hunt said today.

But parents fear there won't be enough to go around and they may be forced to return to at-home learning if they cannot get children in that age group vaccinated before back-to-school dates arrive.

Professor Robert Booy, an infectious disease expert from Sydney University, said getting children vaccinated before returning to school not only protects them, but protects other family members from becoming infected if children catch it at school.

"Children are very resilient, they're able to fight off COVID Omicron much better than we as adults can," Professor Booy told Today.

"Having a vaccine is relevant, it's important, it will protect children, it will prevent them from getting the serious consequences of COVID-19 and having a vaccine will also stop transmission in the family and protect vulnerable members of the family from being infected by children."

© 9News Health Minister Greg Hunt assures there are enough vaccines to go around for children aged five to 11.

Professor Booy said parents should make an online vaccination booking for their children as soon as possible, especially those with major health conditions including cerebral palsy, heart and lung disease and Downs syndrome, as they are the ones who will be more at risk back in the classroom.

"There's a lot of logistics going on. It's coming but it will take time — you won't be able to get an appointment the first week if you haven't already booked."

While there is still some hesitation among parents in sending their children back to school as state and territory infection numbers continue to climb, the Prime Minister has assured all children will be back in the classroom on day one of the new school term.

The decision to make the Pfizer vaccine available to children in this age group is approved by ATAGI and the Federal Government confirmed they will be given one-third of the dosage given to those aged 12 and over.

When National Cabinet met last week, Mr Morrison said giving more children access to the vaccine would mean they can all return to classrooms on day one of the new school term.

"Vaccinating our kids is the next step in our National Plan, which has continually provided us with a safe, step by step pathway to keeping Australians safe throughout the pandemic," Scott Morrison said last week.

"That is our target, that is our objective, many states are already well advanced in their plans for achieving that.